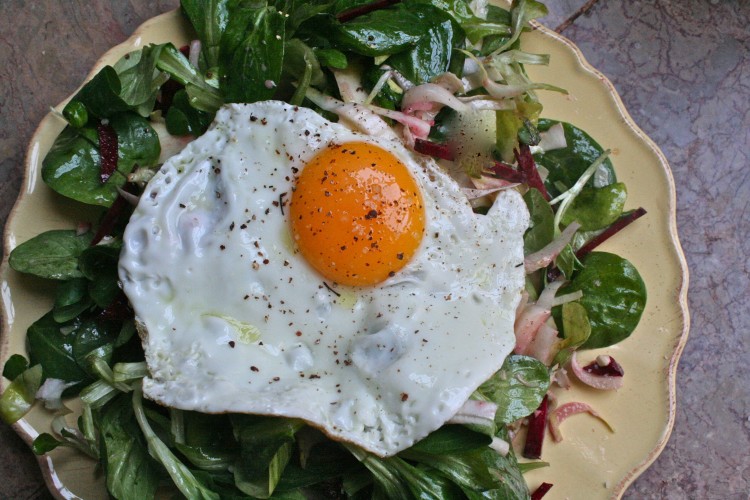 It really does seem to be the end of winter. I can tell this by the sun in the bright blue sky, the temperature hitting 55F by noon, a certain “roundness” in the air even when it’s chilly in the morning.  I can also tell by the way I’m suddenly thinking about winter ingredients as “has beens”.

It is not at all nice of me to say this, I know.  But with the blink of an eye my winter favorites have lost their allure.  If I were building a baseball team of vegetables, for instance, I’d probably leave endive on the sidelines along with celery root and leeks, in favor of a perky radish, a tender leaf of spring lettuce, a brand new chive shoot, a juicy spring onion.

But I can’t, because I’ve got a small host of winter vegetables in the fridge and it’s not right to leave them on the bench.   So today I sliced up an endive, added some beetroot, a shallot, a clove of garlic that is still in fine fettle. I took the last Chantecler apple and sliced it thin, and dressed the mixture with a classic vinaigrette.   To top it off, I put a barely-fried egg on top, from a zesty spring chicken that lives near me. I have to admit, it was gorgeous.  And it was delicious, a crunchy wonderland of flavors and textures, a fete on a plate.

This doesn’t change the march of time of course. Spring is in three more days and I’ve been advised that asparagus isn’t far away (thank goodness). As happy about this as I am, though, I’ve decided to put my winter favorites back into the game. They’ll play well, until they’re all used up.

1.  Place the vinegar, mustard, and salt in a large bowl and whisk together.  Add the garlic and the shallot, whisk to incorporate, then whisk in the two oils until the ingredients are blended and the oil and vinegar are emulsified.  Taste for seasoning.
2.  Place the remaining ingredients in the bowl and toss, toss, toss until the ingredients begin to feel heavy. They will then be perfectly dressed.  Divide the salad among four salad plates.
3.  Heat the oil in a non-stick skillet over medium-high heat.  Carefully break the eggs into the pan and cook just until the white is set, 3 to 5 minutes.  Carefully transfer an egg to each salad, setting it right on top. SEason generously with salt and pepper, and serve immediately.

Create a Cheese Tray for Easter

Cooking and Teaching with a Social Purpose