Eating seasonally and locally is part of my religion.  Almost to absurdity, or so my friends and family will point out.  But I’m committed, for many reasons.  I want small farms to thrive; I want air to be clean and carbon footprints to be as small as possible.  So I don’t care how tired I am of leeks – if it’s winter, we eat leeks.  We also eat broccoli and cauliflower, root vegetables, cabbage,  and endives. Unless the season is poor. Then we eat whatever else is available.  And when a new season sweeps in, I don’t look back.

I confess that of late I’ve fallen off my own wagon or at least let a foot slip off. The culprit is artichokes.  I just cannot resist them, and neither could Louix XIV, who considered them his “cute little sin” and insisted his gardener at Versailles plant multiple varieties (supposedly five).  (I’ve always felt I had a lot in common with French royalty, in terms of my culinary taste at least). Artichokes are  at the market now, fat bunches of mid-size, purple-tinged beauties, the kind that yield little golden and tender hearts, have hardly any “foin” or choke, and whose leaves are so tender they might be butter in a different form.

As I succumb I do think it makes some kind of sense.  The artichoke season in Italy is tongue-in-groove with that of the French season.   As we wave goodbye to the huge, globe-like Camus artichokes from Brittany and the teeny little “poivrades” from Provence, we usher in the purple-tinged versions from Italy, which is only 600 miles away.  And this is where I’m confronted by a conundrum.  What is the definition of local? Is it 100km? 1000km? Does Italy fit in?

There isn’t a definition of local that states exact distance.  When it comes to food, local is a concept and a decision as much as a reality.  I’m ferocious in my devotion to supporting local growers but my commitment is to a doctrine rather than a dogma.  While I always prefer to put my money in the hand of the grower, I want to eat lemons and drink coffee, enjoy tea and season with spices.  So, I practice the doctrine of “doing the best I can” which means supporting local agriculture and squeezing lemon juice over it.  What about you?

Thus, my hymn to the small artichoke in its season from the closest farm possible. 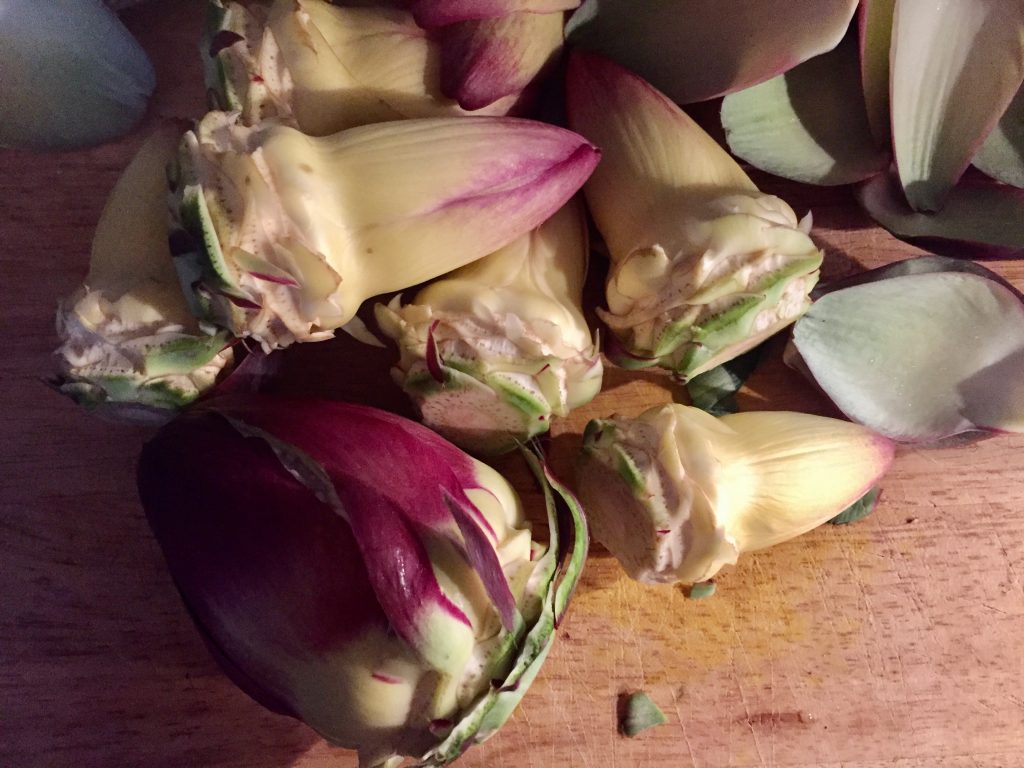 Print Recipe
SMALL ARTICHOKES BRAISED WITH GARLIC - PETITS ARTICHAUTS AUX AROMATES
This is a lovely side dish when to make with any small artichoke. Those called baby artichokes are perfect. They aren’t actually babies, of course, but second growth artichokes which follow the huge globe artichokes on the plant. 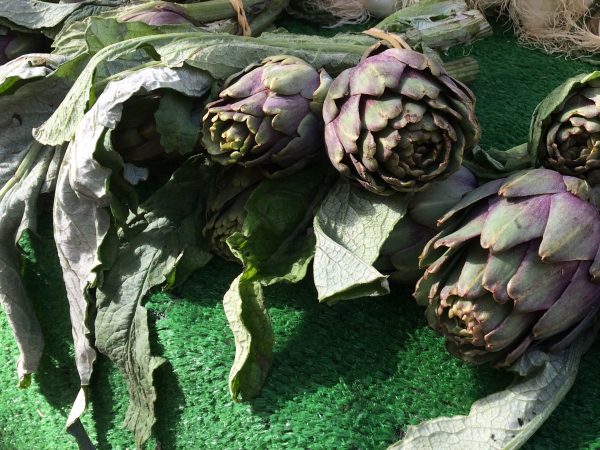 A Weekend in NY, and Lunch Hour